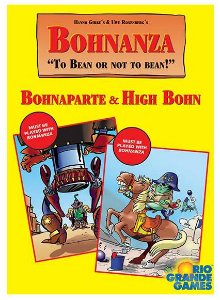 This is three expansions is one box.

Unrest in Beanland. Bean princes in all parts of the land are trying to conquer foreign villages and cities. They use the profits from their bean sales to finance their attacks. At the end of the game, gold coins have no value. Instead, players only score the lands they control as victory points. Thus, the most powerful bean prince is crowned Bohnaparte of Beanland.

This expansion adds game variants and two new bean types, the Cognac bean and the Field bean. With High Bohn, the players may spend their gold coins on buildings located in Virginia City. These building have attributes that give the players new tactics for winning. The Plus part of this expansion adds order cards which allow players to earn extra gold coins when they can fill very specific orders.