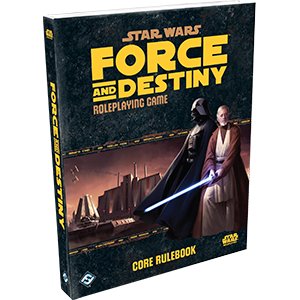 Use the full power of the Force in the epic adventures of the Force and Destiny roleplaying game! You can travel the galaxy in search of ancient Jedi knowledge, protect the downtrodden on your home planet, or pilot a starship for the Rebellion. Whatever your path, the Force and Destiny Core Rulebook contains all the information players and Game Masters need to launch a roleplaying campaign set in the Star Wars® universe.

The beautifully illustrated, 448-page Core Rulebook details everything from using the narrative dice system in combat and creating Force-sensitive characters to the mythology of the Jedi order and locations inside Sith space. It is the fundamental book and launching point for any Force and Destinycampaign.