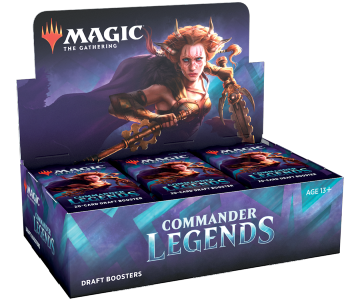 This is a Pre-Order - Product will be available at the Release Date.


Draft with the first ever booster packs designed for Commander—a Magic format all about battling your friends in epic multiplayer games. Grab 3 packs, pick 2 cards at a time, add in some basic lands for a 60-card Commander deck, then show off your deck in exciting free-for-all games with up to 8 friends.

Draft with four or eight players, then play games in groups of four. Each Commander Legends draft is a freewheeling back-and-forth battle in which alliances are formed, friends are betrayed, and grudges are repaid with a vengeance. In the end, only one player will be left standing . . . until the next draft begins, of course!